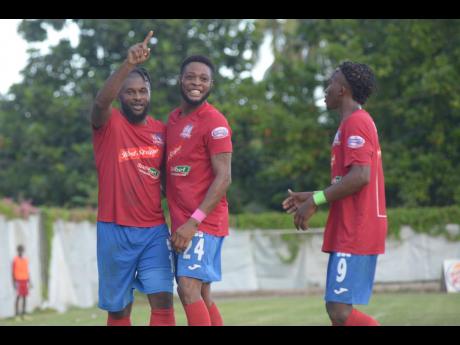 ANGUIN…we are very excited about the transformation of the league professionally (Photo: Dwayne Richards)

Dunbeholden’s Dean-Andre Thomas couldn’t have picked a better time to end his goalscoring funk. With the St Catherine-based club in a precarious position, one point above the relegation zone to start match day nine of the Red Stripe Premier League(RSPL), Thomas’s fourth goal of the season was all that was required in Dunbeholden’s 1-0 over bottom club UWI FC on Sunday.

The win gave Dunbeholden much needed distance from the relegation trap door and vaulted them to eighth place. It was their first win in over a month since defeating Vere United 2-0 at home on September 22. Coincidentally, Thomas’s goal on Sunday was his first since that Vere game.

He was happy with getting back on the score sheet and for his club getting back in the win column. “I have to give thanks for my teammates because every game we come out and work hard, but unfortunately we always give up a silly goal,” he said. “But in this week, we looked at the position where we are in the table and we decided that we are going to come here and work hard and job well done.”

He continued:”We should have put away three or four but unfortunately it wasn’t on. But we got a 1-0 win so we give God thanks for that.”

The midfielder has been the lone player that has had offensive production in this year, scoring all of his team’s goals so far this campaign. He has already reached halfway into his 2018/2019 season total of eight.

He said that the frustrations were plying up after not scoring and his side failing to get wins, heightened by last week’s defeat to Tivoli Gardens when he missed a penalty. “[There was] frustration because Sunday gone I got a penalty and I know that I should have put that away. Because normally I don’t miss those. Coach talked to me and said I had to take that off my back and just play comfortable,” he said.

Assistant coach Andrew Fraser, after the win, said that he needs other members of the team to contribute to the goalscoring load. It has not been for lack of trying. Andre McFarlane had a chance in the 83rd minute of that game to add to their lead from the penalty spot but his effort was saved by UWI goalkeeper Amal Knight. Thomas hopes that the win will allow them to push further up the table.