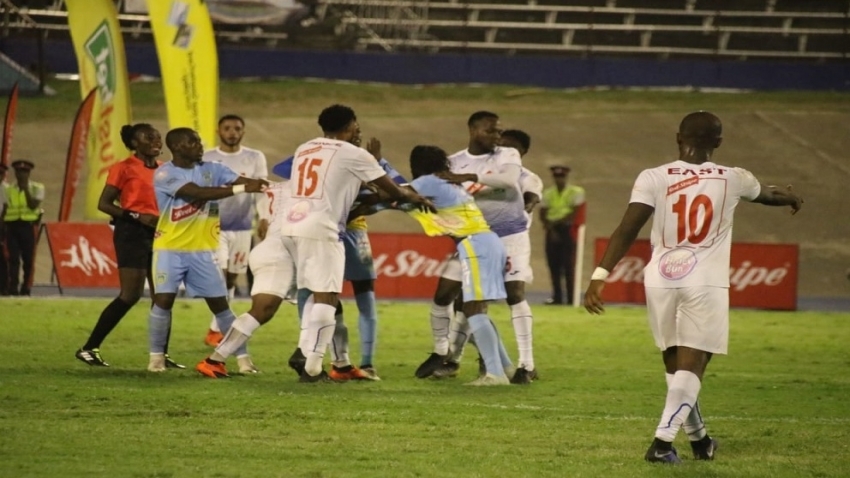 Champions Portmore United, runners up Waterhouse Football Club and some of their players were slapped with fines and suspensions arising from the disruption of the Red Stripe Premier League finals held at the National Stadium on April 29, 2019.

Portmore United won the final 1-0 but the final 10 minutes of the match descended in chaos when fans of Waterhouse FC threw projectiles on the field and fights broke out between players on the field.

The JFF Disciplinary Committee met on May 8 to review the incident and agreed to a number of fines and suspensions.

Furthermore, the Professional Footballers Association of Jamaica (PFAJ) Operations Committee arrived at its own sanctions at a meeting held on Thursday, May 9, 2019.

For breach of Article 8 par 7b – Lack of Discipline and Order inside or Outside Grounds/Disorderliness at Matches, Waterhouse FC was fined JMD$ 150,000 and must serve a six-match probationary period (home and away games) commencing with the start of the 2019-2020 Premier League season.

Should there be any repeat or similar incident consideration could be given to a stadium ban or a region ban without spectators.

Meanwhile, Waterhouse mascot Damion ‘Eptic’ Lewis been suspended from all PFAJ sanctioned football-related activities for six matches commencing with the start of the 2019-2020 Premier League season.

‘Eptic’ may choose to attend games during this period but cannot be associated with the game as a mascot or any similar function during his suspension, the JFF said.

The PFAJ Operations Committee was also deeply concerned about the general lack of discipline by some players and members of the Waterhouse FC throughout the night of the final.